Hero arm-wrestles a series of increasingly strong and increasingly odd characters, including a girl and her robot.

Arm Wrestling used TWO monitors, much the same way that Nintendo's Punch Out did. At one point, a villian would appear in the top monitor, and try to throw down a money bag at you in the lower monitor. You can pull the joystick away from the console for special actions.

"Bald Bull" makes an appearance as a masked character (you pull on the joystick to pull his mask off at the end of the match). 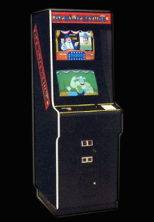 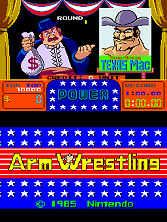 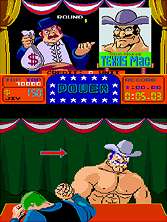 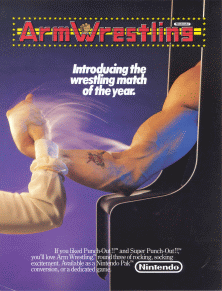 by sodapopinski. Comment: "a deceptively difficult game. My dorm mates and I would spend hours (and lots of quarters) trying to beat that robot ape. In the vein of punch out but much more bizarre and much more Japanese in concept and feel. Had a great sound while wrestling. The announcer would say "LEKBO! LEKBO! LEKBO!" I can still hear it in my head." 2006-01-02 10:26:12Z

Search the following for Arm Wrestling