The game follows the plot of the comic book and short-lived cartoon series. You play as one of the three main characters (Jack, Mustafa and a woman whose name eludes us) and your goal is to save the dinosaurs from the poachers. Each level contains the usual amount of ennemies as well as a certain number of dinosaurs (the number varies per level). Weapons and power-ups are plentifull and varied. The guns are particularily innovative. Each level is guarded by a boss character taken strait fron the pages of the comic books. At the end of the game, you must face of against the leader of the poachers. 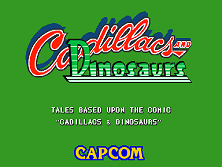 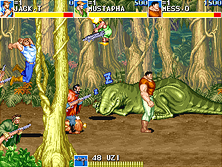 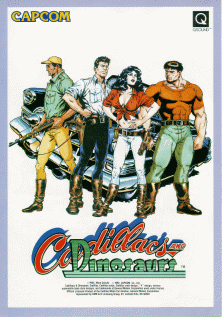 by lupine_ragdoll. Comment: "I remember this from when I was a kid! This has to be one of the most addictive games I've ever come across, practically all the time I spent in Spain was spent playing this game in a pub near our apartment. Definitely worth a go if you can find a working one!" 2005-11-03 08:08:23Z

Search the following for Cadillacs & Dinosaurs